One of the key to good photography is lighting. For pre-wedding photography in Taiwan, it is highly likely that most of your shoot would be located outdoors but Taiwan unlike Singapore is a location which is affected by the 4 season. As such when making a booking for your pre-wedding, this is something you have to factor in.

The link above gives you a detailed introduction to the weather in Taiwan. If we are to follow the guide of summer, fall, winter and Spring, in terms of Lighting, Summer would be the best. However, we need to remember that we are talking about pre-wedding Photography.

During the Summer season (June – August), while normally natural lighting is at it’s best, we need to remember that you the couple will be walking around in your suits and gowns. The heat in taiwan during this season will be as hot as you have it here in Singapore or even hotter. As such, sweat becomes an issue. While the make up artist can touch up the make up, the whole wedding shoot can be tiring due to the heat. Not to forget the rain could be an issue too due to the tropical cyclones.

As such it is advisable to wait till Fall (Sept to November) for 2 reason. One is the temperature which should however around 20+ degree  and the second reason being that this season is where the rainfall is usually at it lowest. While photographer can use flash light to fill any lack of light during the shooting, raining would definitely cause an issue to your wedding photography.

Winter (December – Feb) like fall has usually low rain fall but the temperature could be too cold for outdoor shoot. However, you can consider going over during the Chinese New Year Period which usually is towards the end of January to mid February. As weird as it sounds, the Chinese New Year period has its own perks for wedding photography.  Probably a good date would be to arrive on the 2nd day of Chinese New Year, do your fitting on the 3rd day and the shoot on the 4th day. For example, the road in Taipei are usually emptier which means you are less likely to get stuck in traffic which would than equate to more time for photo-shooting. For example, one of our couples managed to do a shoot along the road of Taipei 101 which would be impossible during other time frame. Popular places like JiuFen will be pack but again this place will be pack with tourist if not locals during other timeframe.

As for leisure, you need not worry as most tourist spot would be open during the Chinese New Year while the smaller business would open usually on the 3rd to 4th day which would fit your schedule since you probably can’t binge eat till the shoot is done. The only con i can think of right now is the price for the photoshoot. Seeing that it is done during such a important festive season, it is likely there would be a surcharge involve for the photoshoot. During our 2017 Chinese New Year trip, we realise that there are some cherry blossom during this period too if you are lucky. 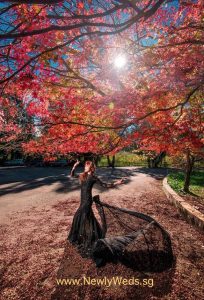 Spring (March to May) very much like Fall is good time to do your photoshoot with a additional perk of the Cherry blossom  which usually flourish in mid march. The only down point during this phase is that the weather can be rather crazy and rain might affect your plans.

Still for Cherry blossom lovers it might be worth the risk to do your pre-wedding photoshoot in this season.

Taiwan is a beautiful place with good foods and nice scenery and is one of the favourite place’s for Singaporean couples to have their pre-wedding shoot done. You can consider the pre-wedding package in taiwan offered by the us at The Newly-weds too. With on location shoots of more than 3-4 places, it is one of our best selling package.

Wedding Gown RentalLooking for a wedding gown for your actual day? At the newlyweds, we aim to provide gowns of quality at affordable prices. As a couple whom have tied the knot not too long ago, we …